Kate Winslet has been a popular figure in Hollywood since her performance in “Titanic”. She has dazzled fans with her talent and has a catalog of films that many actors can only fantasize about.

But away from her career, the British actress has been through a lot, especially in her love life. 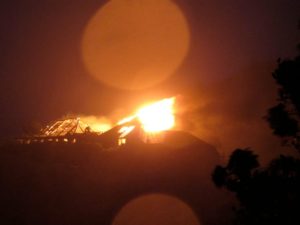 The star has experienced two failed marriages, but now everything seems to be going well with her third husband, Ned Rocknroll. The two met in August 2011 under dramatic circumstances.

In an interview with Entertainment Tonight, Kate revealed how they met. At the time, the actress and her children were vacationing on Necker Island, a 29-acre private island owned by billionaire Richard Branson.

While they were at the home site, their house was struck by lightning and a fire broke out. Rocknroll, Branson’s nephew, was in an adjacent building on the island.

He was the only man with a flashlight on his head and a pair of shoes as everyone tried to escape the fire.

Kate recounted how she ran out with only a bra, her passport and her children, and Ned helped them to safety. After the incident, the actress and Rocknroll became very close, and soon after, she fell madly in love with him.

By 2012, the lovebirds were already engaged, and in December of the same year, they were married in a private ceremony in New York City. According to reports, only a few family and friends attended the occasion, including actor Leonardo DiCaprio. Eleven years later, Winslet won an Emmy Award for Best Lead Actress in a Series for her role in “Mare of Easttown.”

While giving a speech in the Emmy press room, the star noted that winning the award had been great, but that the most special thing had been having her husband with her.

Winslet recalled attending the 2011 Emmy Awards with Ned, whom she had met shortly before.

“We were coming up to the Emmys. I was in a whirlwind after meeting him and couldn’t even concentrate,” the actress told People. “I vividly remember making an absolutely dreadful speech because I wasn’t on planet Earth, because I had fallen madly in love with this person I had just met.”

A decade later, Rocknroll joined her at the Emmy Awards, not as an acquaintance but as a husband, and that meant everything to her.

Later, during her award acceptance speech, Kate described her children and husband, whose hands she will hold forever, as the best people in the world. Her husband is a father and homemaker

In 2021, Winslet spoke with The New York Times about her marriage. The actress praised her husband for being very supportive and funny, despite all his millions, and stated that he was everything to her.

“He is a superhuman householder. He takes care of us, especially me,” added Kate.

Furthermore, Winslet labeled Rocknroll as an extraordinary life partner. She explained that, before they met, he didn’t want to marry a celebrity who was always judged by the public. However, since their marriage, he has gone out of his way to show his love for his wife. For example, Ned often helped Kate with her lines, even though he had dyslexia and difficulty reading aloud.

In addition, the actress’s husband changed his pseudonym to his birth name, Edward Abel Smith, after having used “Ned Rocknroll” for a while, because Kate asked him to.

After changing his name, Ned added Winslet as his middle name because his children also used it.

“When we travel together, having that name in the passport makes life easier,” Kate told The New York Times. Overall, the Emmy Award winner admitted to being lucky to have Ned in her life. She also said she thought it was funny that her husband was a regular guy in contrast to having a rock n’ roll persona as his pseudonym suggested.

Her life in a quiet town

Kate Winslet is one of Hollywood’s most notable stars. But for all the fame and fortune she has amassed over the years, she has always wanted to live a private life away from the spotlight with her family.

More than a decade after her marriage, the actress seems to have fulfilled her dream. She lives with her husband and three children, Mia, Joe and Bear, in a beachside mansion in West Wittering, Sussex. Kate and her family have resided at the property since 2015 and apparently have no plans to leave anytime soon. As of February 2022, the mansion was worth more than $4.5 million after Winslet added a basement pool, garage and pool house to the property.

The couple’s home not only holds fond memories for the family, but has also served as a location for filming a movie.

A production was filmed in their home

In 2018, Winslet allowed her mansion to be used for filming “Blackbird”. This allowed her to come to the set and return home easily. Overall, it’s great to see the Hollywood star living a happy life with her family after going through two failed marriages.

Her first marriage was to Jim Threapleton in 1998. They divorced three years later. Her second husband was Sam Mendes, whom she married in 2003. Their union ended eight years later.

Hopefully, Winslet and Rocknroll will continue to grow stronger by the day and their love will last a lifetime.