Obviously, common sense should prevail here. It is not advisable to approach a wild bear unless you are a trained professional.

An unidentified woman was captured on video as she jumped out of her car and got too close to the large furry creature. She began posing next to the bear. You can hear other people in the background, quite rightly, saying:

“I have to film this. Look at the way she’s holding her hand. Stupid girl.”

When she gets too close to the bear, the bear lunges at her, and she rushes to her car to escape. 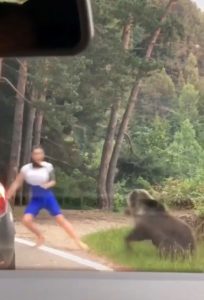 “Do you see how stupid she is? Get in the car. Why risk it for a picture of a bear?” people can be heard saying in the background.

It is not known where in Romania the clip was filmed, but Romanian authorities have had to repeatedly remind drivers that drivers should not approach bears on the side of the road or treat them as pets.

A bear is a legally protected wild animal, not a pet. 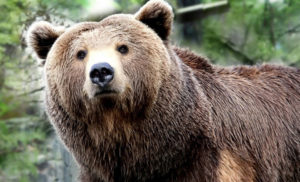 A bear is a legally protected wild animal, not a pet.

Authorities in this country warn: A bear that has tasted cookies, waffles, and felt that it could get its food that way will never be able to adapt to the forest again.

Wild animals are not for posing next to them: unless you want to be their lunch.