We all know that young children are capable of doing some pretty bizarre stunts out of curiosity. After all, they are just exploring everything the world has to offer them.

While most of the time toddler experiments are cute and harmless, sometimes things can go the other way, a little in the wrong direction. This toddler learned his lesson early on, but thankfully, no real harm was done. 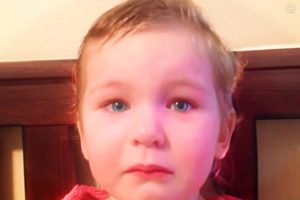 A toddler named Ansleigh gave her dad quite the shock last Friday. She had given herself a new mullet hairdo behind his back.

“It was funny,” he admitted.

Ansleigh said “Dad I did a really good job for the first time I’ve ever cut my hair.” 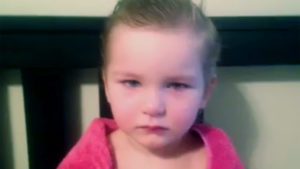 Clark, a father of four, said it was the weekend of Dec. 4, when he was at home babysitting and his wife, Janie, was at a conference.

While the youngest child was napping, his three-year-old daughter, Ansleigh, picked up the scissors used to cut the wrapping paper and snuck into her room. 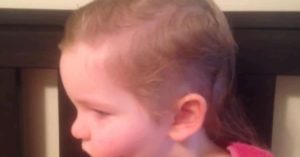 “I stuck my head in the door and said ‘Hey, what are you doing?’ and then I noticed her bangs were gone,” Clark said.

“She thought she did a good job, but every time I ran my hand through her hair, more of hair came out.”

Clark shot a video of Ansleigh explaining why she gave herself a mullet haircut. She wanted to be a stylist “like Miss Jessica,” a family friend.

But it’s what she asked in the end that cracked me up—you’ve got to watch the entire video to find out!

POSITIVE 0 31 views
Every child has a hero, and usually it is always a cartoon or comic