When a young child saw his little sister’s bed on fire, he was not frightened and did not run away. Instead, this brave man risked his life to protect his sister from the flames. 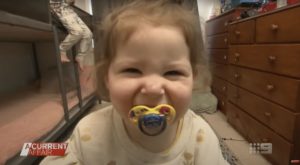 Jade Ward lived in Adelaide, Australia, with her partner and four children, Aspen, Kalila, Neva and Elodie. The couple was busy raising three babies and caring for the infant. They loved their babies and felt blessed when their home was filled with the cries of their children.

When the youngest, Elodie, was five weeks old, she caught a cold. The baby was very weak. She had a stuffy nose. Ward had to take care of the little girl all the time, horrifying her.

It was incredibly difficult for the woman to care for the newborn and to look after the other three children. Ward asked her partner to take the newborn to the hospital after work, hoping that timely treatment would help her feel better.

While Elodie was with her father at the hospital, Ward tucked the two older babies, Aspen and Kalila, with their bottles and blankets on the couch. She put the third child, Nevea, then 18 months old, in the crib and turned on a movie for the children. 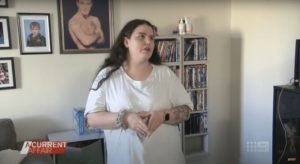 When the mother of four saw that her children were relaxed and ready for bed, she went into the other room and turned on the TV. She knew her partner would be back soon with baby Elodie.

Although she had no intention of taking a nap, Ward was so exhausted that she fell asleep. When she finally awoke, there was a huge mess around the house. She could hear the sound of fire alarms and her oldest son Aspen screaming.

Aspen and another young sibling weren’t asleep and they found a gas lighter.

“They started numerous fires around the room so it was lucky it all didn’t go up,” Jade said.

“They started little fires they said and blew them out and they lit Nirveya’s cot thinking they could blow it out, but the netting has gone up and spread,” Jade said.

Baby Nirveya was asleep in her cot in the middle of the lounge room at the time.

“He knew she was in trouble … he told me he climbed in to get Nirveya out,” Jade said. 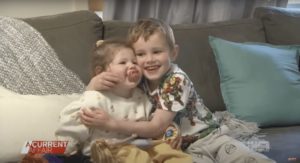 Nirwaya would have been engulfed in flames, but Aspen took the brunt of the fire, covering his sister.

“I got burned when I was covering her,” Aspen said.

Jade said she woke up to screams and fire alarms, so she ran out of the bedroom.

“At first I couldn’t see her … there was only a small amount of bed,” she said.

“It was completely incinerated. The flames were as high as me; you could feel it, the heat from the door. I just reached in and grabbed her and put her on the floor.” The memory of that night is still raw.

Jade’s sister Aisha got to the house before the ambulance, just as a stranger also turned up at the door.

“As he approached he said he was a burns specialist; that he was close by at a friend’s event, a party, and got an alert,” Aisha said.

There were weeks in hospital for the young hero, but there were very few complaints from him.

His brave actions left little sister Nirveya with just a minor burn to her nose that will eventually heal, but Aspen wasn’t so lucky after the plastic netting from the cot burnt into his arm.