Harry Beardsley met a homeless man named John on the street and could never have imagined the surprisingly kind results of this encounter. 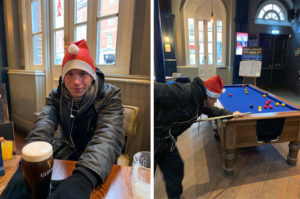 A resident of Reading, England, invited a new acquaintance to sit in a pub. There, Harry and 28-year-old John drank beer, played billiards and, of course, talked a lot. Realizing how difficult John’s life was, the kind man decided to help him and published a post on his Twitter page. In the post he talked a little about the homeless man, who has some experience in the bar and in the kitchen, and asked users to think – if they have in mind a suitable job for this man.

Within hours, caring strangers were sending donations for John. And soon Harry announced that no more money was needed. More than £5,000 was raised. That’s enough money to rent a place to live for six months and get himself cleaned up. Which is pretty important. After all, John is now going to go to the places where he has been offered a job and where he will need to make a favorable impression. Among other things, the homeless man has been invited on probation to a local construction firm and to the very pub where he and Harry talked. We can only wish John good luck, and heartily praise all those who helped him.

As for Harry, who started this good deed, some people think he should have been knighted.