Parents long to see their children grow up and live good life. Watching them fight for their lives in a hospital bed is a real nightmare for anyone.

The people in today’s story went through the worst time of their lives when their son was in a coma. They had lost all hope and were ready to say goodbye when something unexpected happened. The teenager opened his eyes and started laughing. 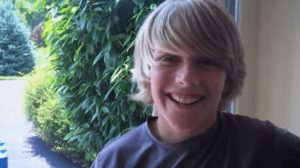 Micah Anderson enjoyed motocross with his brother, Josiah. Both had experienced the thrill of the extreme sport for more than a year when they joined a practice facility in South Carolina.

Micah’s mother, Katja, described him as «just a very fun-loving, very kind and gentle boy,» but she couldn’t imagine how one incident would change her teenager’s life forever.

In July, on Josiah’s birthday, the brothers went to the motocross track. At one point, Micah jumped and fell to the ground, and his brother, who was riding behind, was unable to brake in time, so he accidentally landed on his head.

Josiah’s heart raced as soon as he realized what had happened. Quickly, he stood up and tried to resuscitate Micah, but it didn’t work. Then, he jumped on his bike and rushed to inform his father, Shawn, about the accident.

«I think Micah is dead,» Josiah told his father as he tried to catch his breath.

Shawn held his son’s lifeless body for 45 minutes before paramedics arrived and airlifted him to the nearest hospital.

«He was gray, barely breathing like a little whimper. And every time he breathed, I was like, ‘is he dead,'» Shawn recalled.

Shawn, Katja and Josiah were praying for a miracle; after examining Micah’s head injuries, doctors were not hopeful. According to them, the teenager’s recovery was nearly impossible.

«We were hearing phrases like ‘life support.’ They were preparing us, you know, that there would be no recovery,» Katja recalled, according to CBN.

Meanwhile, Shawn couldn’t believe his son’s chances of survival were close to zero. He couldn’t accept the truth.

Seeing her son not respond to treatment was more than Katja could bear. She cried her heart out as she prayed for his recovery. She remembers asking God to allow her son to «be like the Micah he always was.»

News of the motocross accident spread like wildfire. Along with friends and family of the Andersons, thousands of people around the world prayed for Micah’s speedy recovery. They wanted him to wake up from his coma as soon as possible.

«We had millions of people praying for us, and from the beginning I had this deep peace and thought that even if Micah didn’t recover, he was okay,» Katja said. 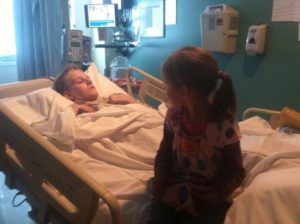 The next few months were a nightmare for the Andersons. As doctors tried to wake Micah through multiple treatments, his body tremors increased, making it difficult for his parents.

«I remember we got to a point where we had to say, we’re going to let him go completely,» the distraught mother expressed.

After trying several treatments, the doctors gave up. They told Katja and Shawn that there was nothing more they could do to wake Micah. He would likely spend the rest of his life bedridden, unconscious.

The doctors instructed the Andersons to take him home. It was hard for Katja and Shawn to see Micah lying in his bed, unresponsive. They couldn’t believe it was the same teenager who loved to motocross.

One day, Shawn was walking by Micah’s bed when he suddenly stubbed his toe on it. The next moment, he heard him laugh. It was the same laugh he had longed to hear for more than three months.

Shawn quickly got up, sat in a chair next to Micah’s bed and began to tease him and talk to him. His son couldn’t stop laughing and he was thrilled to see him come back to life.

He informed the doctors, who confirmed that Micah was able to respond. However, he was still unable to speak or move. 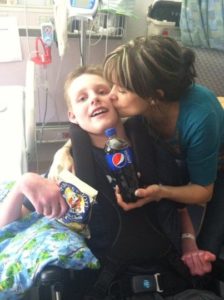 Micah underwent multiple therapies after waking up. A few months later, he spoke again and revealed a shocking secret he wanted to tell his parents. He told them that he had met God in heaven while in a coma.

«I turned around, and I was looking into the face of Christ, and the angels were just worshiping Him. There was no explaining how much joy I had,» he added.

He said Christ wanted to send him back, and when he asked why, he replied:

«They should know about my love and my Father’s love for everyone, no matter what they have done; and that I love them, forgive them, and accept them if they come to the cross.»

The unusual experience changed Micah’s life forever. He now enjoys expressing his love for Christ before people to help them heal. Despite having mobility problems, he is content. He sees his life as an opportunity to make other people happy.