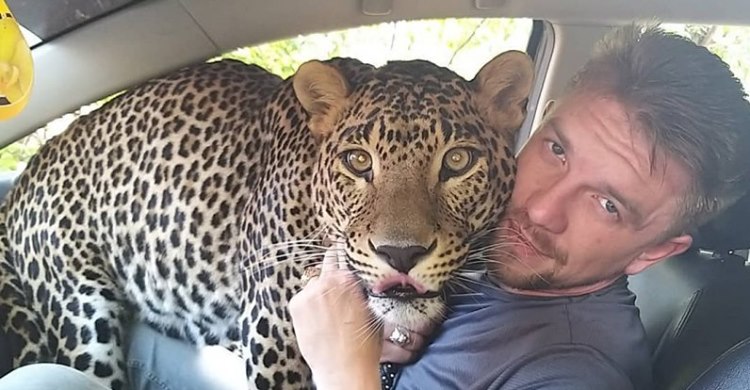 Alexander used to work at the zoo. His job was to keep an eye on the predators. Even then he noticed a beautiful leopard named Caesar. The animal looked very sad. He was very sad for his dead friend, with whom they shared a cage. Then the zoo had financial problems and it began to close. Alexander decided to redeem Caesar and take him to himself. The guy did everything to create favorable conditions for the predator to live in his house. He converted one room into an aviary. But the animal turned out to be very contact. Caesar is always close to his master. It’s like he thinks he’s just a big cat. Under the same roof, leopard and Alexander have been living together for more than 3 years.

“He completely changed my life, that’s for sure. Who am I to him? Probably, most likely a friend, but not a master in any way. We have a complete mutual understanding, we even get sick at the same time.” The guy didn’t take Caesar on a whim. He is sure that it is dangerous to have predatory animals in the house. But this leopard needs special care. After all, he is tame and will simply die in the wild.

“This is a huge responsibility, Caesar is a predator. In this case, you have to think not only about him, but also about the people who live nearby. You need to be extremely careful,” says Alexander. Moreover, the guy advises not to start predators. He is constantly engaged in his pet. He pays a lot of attention to his nutrition, health and training. He walks a lot with Caesar, educates him, learns to understand and is always on the alert. As a result, the leopard is calm, does not show aggression and feels great. This is a huge effort!