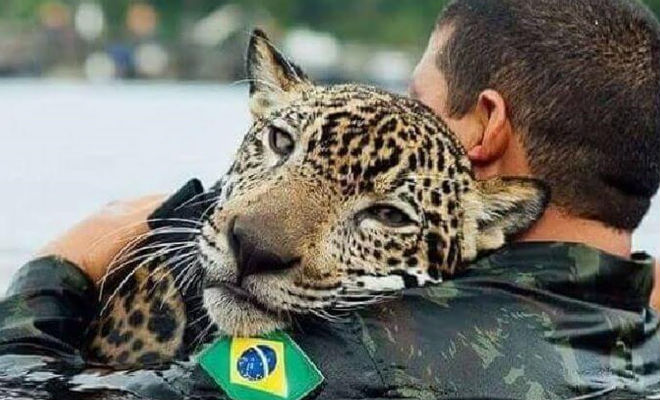 This story took place in the Amazon jungle. Soldiers of the Brazilian army saw a teenage jaguar that was drowning during a flood.

Young people rushed to save the wild beast…

The jaguar was exhausted, another couple of minutes and he would have drowned. When people grabbed the beast, it did not resist at all. The soldiers carried the predator out of the water on their hands. He didn’t have the strength to walk. The beast trusted these people and gratefully accepted their help.

After assessing the condition of the animal, people decided not to leave it in the jungle. A weak and exhausted predator would be easy prey for poachers.

Local authorities allowed the animal to be left in the care of the Brazilian army. The jaguar grew and grew strong. He played with people trustfully, considering them his family. The handsome jaguar from the jungle was named Jikitaya. He is already quite an adult, strong and fast. Jikitaya still lives next to those who saved him, surrounded by care and love!

These people deserve respect and admiration. Brave, courageous, kind and compassionate. As long as there are such people on Earth, humanity has a chance!