In the middle of the deep forests of Finland stands one of the strangest rocks in the world. The giant boulder Kummakivi is supported on a thin base and does not fall down even under pressure. About 8000 years ago, it looks as if someone picked it up and put it there on purpose – and it weighs more than 500 tons. 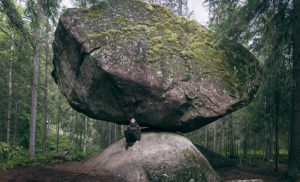 The stone is five meters high and seven meters wide and stands on a perfectly smooth cliff. The legend, widespread among the locals, that Kummakivi was allegedly brought and placed here on purpose, comes from this. 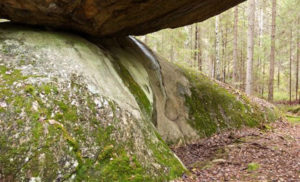 Geologists believe otherwise. Kummakivi-like rock formations are known to science as “precariously balanced rocks” (PBR). Scientists see them as a kind of seismometer – the very existence of balancing rocks shows that the region is not seismically dangerous.

This region of Finland was once completely covered by a glacier. About 8,000 years ago, the glacier receded, leaving behind Kummakivi, an impressive natural monument,” explained Roberto Corrie, a doctor of archaeology from Birmingham. 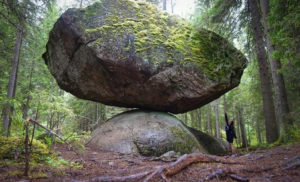 From the outside, however, Kummakivi does look like an object that was “brought” here and carefully placed:

There are not many such objects in the world. Almost every one of them has a legend behind it – of course, about the giants who once walked the Earth.