A garden can be not only functional, but also a real work of art. This was the formula that motivated Professor Sam Van Aken to design a unique park complex. The horticulturist tried to create hybrid trees that would bring fruit all year round, and the magical fragrance of the flowers would never fail to inspire visitors. The result was “Frankenstein trees”, combining several dozen crops at once. 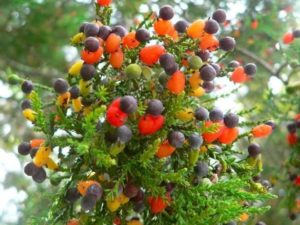 Van Aken describes himself more as an artist than a gardener. Although his childhood was spent on the family farm in Pennsylvania (USA), his passion for beauty and admiration for nature prevailed over experiments in breeding hybrids. Nevertheless, the result of the first experiments was participation in the thematic exhibition of 2008 with his own vegetable hybrids. Only after that the scientist thought about grafting fruit trees and creating a “40-in-1” plant. 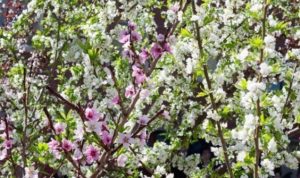 To the unsophisticated visitor, Van Aken’s trees did not make an impression. Yes, his trees looked a little strange and ridiculous because parts of different plants had been grafted onto the base, but nothing more than that. Casual passers-by just shrugged their shoulders and muttered something about a “scientific experiment.” The fairy tale came true only in the spring. 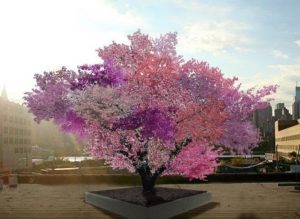 It was then, in the brightest season of the year, that hundreds of flowers of all hues bloomed on the trees. The amazing riot of colors demonstrated to others what can happen when nature inspires creativity. Then, within a few months, Van Aken’s trees produced a rich harvest of plums, peaches, apricots, nectarines, almonds and many other stone fruits. For the first time in history, it was possible to do the unbelievable – to combine several crops capable of yielding in one tree at once. 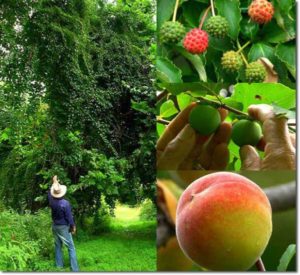 Van Aken rightly felt that it was the stone fruits that had the greatest diversity, both during flowering and fruiting. In addition, they have better mutual compatibility. And care for different cultures is almost the same. The hardest thing was to graft cherries. But with almonds, apricots and plums, there were no problems. 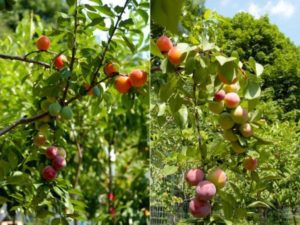 Even in these near-perfect conditions, it takes at least five years to develop and create a single tree. Van Aken is personally involved in spring pruning, forming multiple crowns according to his own ideas of beauty. Professor believes that 40 is the optimal number of varieties grafted on one tree. This makes it possible to get a diverse harvest from it. 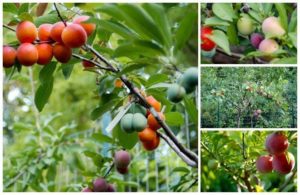 Van Aken plans to create an outdoor museum, with branches in various U.S. cities. He wants to create, surprise, inspire, and preserve the most valuable and ancient varieties of stone fruits. In the future, Van Aken’s gardens will blend into the urban environment and, as the professor hopes, help people rethink their relationship to nature and their place in it.

POSITIVE 0 25 views
Music is a universal language that needs no translation. This is proved by a

POSITIVE 0 46 views
Now among the celebrities who have become famous around the world, there are many

POSITIVE 0 42 views
An elementary school teacher, who is also an artist and an actor, creates very

POSITIVE 0 56 views
Unfortunately, not everyone manages to become parents just when they want to. Situations are

POSITIVE 0 65 views
Bobby and Kenny McCaughey already had one child, but they just needed one more

POSITIVE 0 58 views
Films are not filmed only in pavilions. Often real locations are used as sets: