An Italian is in charge of the White House. He is not the president of the United States, but his role is equally if not more important to the thousands of poor children to whom he gives a plate of well-seasoned pasta every day. His name is Bruno Serato, he is 62 years old, and his White House (so named because it resembles the residence of U.S. presidents) is a historic restaurant in Anaheim, the California city near Los Angeles where the first Disneyland park is based. Since 2005, Chef Serato has distributed 3 million hot meals to children who would otherwise have missed dinner. The economic crisis of 2008 did not stop him, nor did the fire that destroyed his restaurant in February 2017, forcing it to be closed for a year and a half.

“When tragedy strikes you,” Serato tells, “you have to do the thing you enjoy the most. For me that means cooking pasta for the children. They were the ones who gave me the strength to overcome an inferno not only of flames but also psychologically. And to start again.” 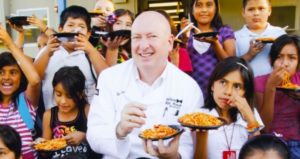 It had all started one afternoon 14 years ago when the chef had gone with his mom Caterina to volunteer at a center of the Boys and Girls Club, an organization that assists minors in need.

“It was about 4 p.m.,” Serato recounts, “and we see a little one munching on some chips. The center director explains to me that that will be his dinner, because he lives with his parents in a motel room, where there is no kitchen. My mom Caterina told me right away: why don’t you make him some pasta? But there were 20-30 other children in the center in the same condition. So I brought noodles for everyone. And I haven’t stopped since!”

The economic crisis that erupted in 2008 has increased the number of needy children: from the initial 30 or so to 300 and more a day, distributed in various centers.

“So many tourists come to have fun here at Disneyland, but those who work for them,” the chef explains, “often earn minimal pay with which they struggle to support a family. Many live in motels because they can’t save enough to put down the deposit for renting an apartment. So they don’t have a kitchen and their children often miss dinner.” 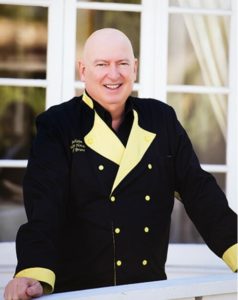 Self-funded until 2011, the Feeding the Children project was in danger of closing.

“With the crisis, business was less good, and the manager of my restaurant had told me that the free pasta cost too much, about $80,000 a year. But meanwhile,” the chef continues to recount, “the manager of the Boys and Girls Club was telling me that the pasta was no longer enough for all the children. What to do? I prayed to God and doubled the pasta, hoping for a miracle.”

The miracle materialized with CNN naming Serato one of ten “Heroes of the Year,” giving him so much publicity that he attracted a lot of donations.

“From Italy, Barilla immediately contacted me, sending me a whole truckload of spaghetti: it still supplies me with pasta and sauces,” says the chef.

Who at that point decided to create a nonprofit foundation naming it Caterina’s Club, in honor of his mother (who passed away in September 2014 on the eve of her 90th birthday) and expanding its activities – in addition to “Feeding the Children,” which now distributes 20 thousand hot meals per week to 80 centers in 27 cities in Orange county, the area around Los Angeles – with two other initiatives. One is called “Welcome Home” (“Welcome Home”). 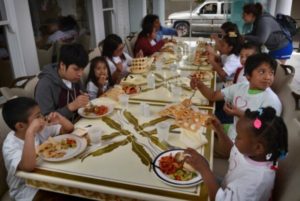 Serato sums it up this way,

“I help families with children leave the motels where they live, often side by side with prostitutes and drug dealers. I find them an apartment and pay the required two months as a guarantee and down payment for rent. I manage to move one family every two weeks, in all almost 200 so far.”

The effect on the children is enormous. “Parents,” says the chef, “are sometimes suspicious at first, not understanding my purpose. Then they thank me and send me news: ‘My son was the worst in school and now he’s top of the class!’ they tell me.”

“For three months I make them work in my restaurant, teaching them all the trades of this business, from dishwasher to waiter to cook. More than 100 have already graduated from my ‘Academy’ and found jobs.”

He himself had started as a dishwasher when he arrived in California in 1980 with only $200 in his pocket.

“I wanted to learn English, as well as Italian and French, which I speak because I was born in France, where my parents had emigrated after the war,” the chef says. 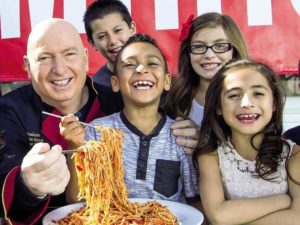 In Italy, where the family had returned in ’66, Serato had worked in restaurants since he was 14.

“My sister, who had married and was living in California, hosted me for the first two months. But I,” the chef recalls, “soon got tired of being at home and got a job as a dishwasher at the White House. The owner immediately understood my potential and after a few days promoted me to waiter. Four years later I became the manager, and in the seventh year I asked to buy the restaurant myself. But I didn’t have enough money.”

The old owner only needed a handshake to give Serato confidence and grant him the White House for rent for three years, enough time to save enough to get a bank loan and become the owner himself. Under his management the restaurant became famous and frequented by real presidents-Jimmy Carter and George W. Bush-and celebrities such as singer Andrea Bocelli, soccer player Pelé and conductor Carlo Ponti Jr. the son of Sofia Loren. “Sofia Loren,” the chef recalls, “called me the day of the fire to give me courage. I felt as if all of Italy was hugging me.” The actress wrote in the introduction to Serato’s book The power of pasta, “Bravo Bruno! You used pasta, Italy’s most famous culinary import, in the best way to inspire one to do good.”