Eddie Kenzo is a popular dancer, not only in his native Uganda, but far beyond.

He lost his mother when he was 4 years old and he didn’t know his father. He lived on the street for a long time, and his only joy was music and dancing. 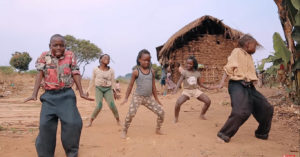 At the age of 13 he did track down his father, who helped him get an education. After Ýdris took the pseudonym Eddie Kenzo, and began to write music.

His collaborations with famous African performers brought him popularity, and Eddie decided to organize the group Masaka Kids Africana, in which he often takes talented children.

Looking at how they move plastically, how they feel rhythm, and how they show artistry, it seems that this talent is passed to them with mother’s milk.

POSITIVE 0 56 views
When we grow up, life teaches us that we must work to earn a